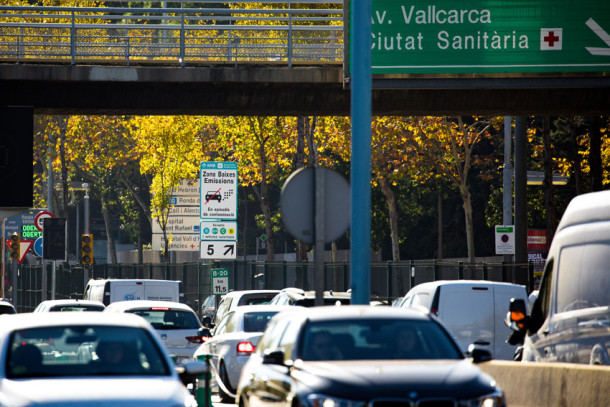 Five municipalities of the Metropolitan Area of Barcelona to regulate the traffic of heavily polluting vehicles from 1 January 2020, in a low emission zone of 95km2

The municipal government of Barcelona has presented the proposed ordinance to enable the launch of the Low Emission Zone (LEZ) on the first day of 2020, at the same time as the Barcelona climate emergency decree. The municipal councils of L'Hospitalet de Llobregat, Sant Adrià de Besòs, Cornellà de Llobregat and Esplugues de Llobregat will also be issuing decrees with the same objective. These regulations are coordinated by the Barcelona Metropolitan Area AMB, and aim to reduce environmental pollution and preserve and improve air quality and public health. The latest assessment report on air quality by the Barcelona Public Health Agency estimates that more than 350 deaths occurred due to excess pollution in Barcelona in 2018.

The Barcelona Ring Roads LEZ will be the first in Spain to apply this measure, which is already in place in European cities including London, Berlin, Amsterdam and Rome. Penalties for failing to comply will range from 200 to over 1,800 euros. The initiative is part of the institutional agreement between the Government of Catalonia, Barcelona Metropolitan Area (AMB) and Barcelona City Council, covering aims including reducing air emissions of pollutants with local effects (primarily NO2 and PM10) by 30% in the next 15 years. 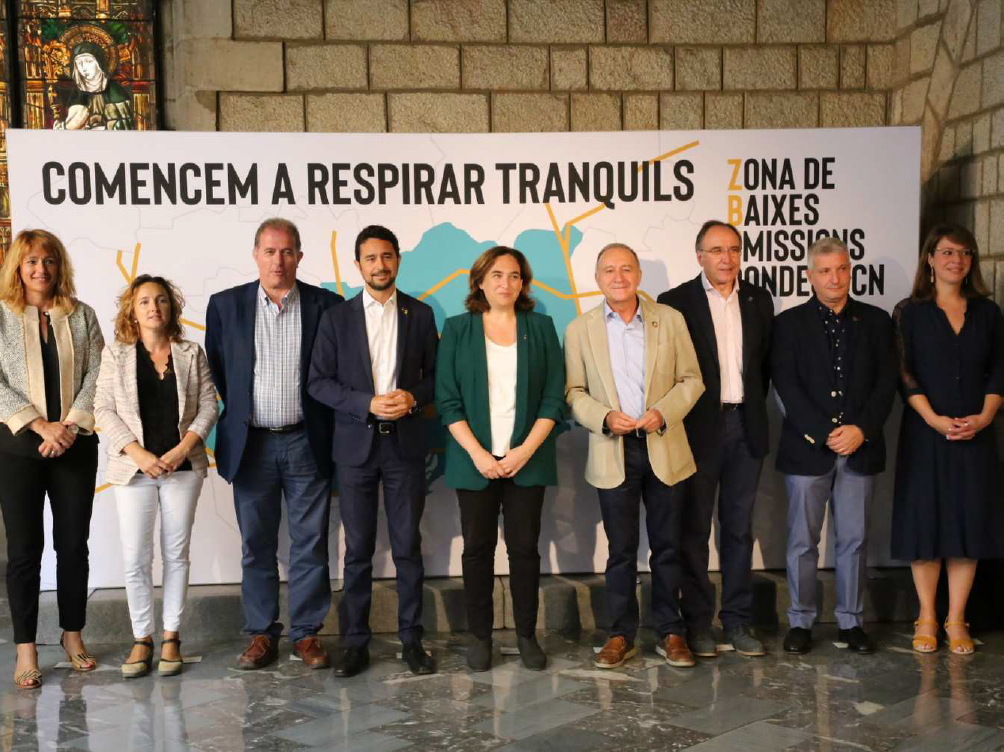 Barcelona and the municipalities of l'Hospitalet de Llobregat, Sant Adrià de Besòs, Cornellà de Llobregat and Esplugues de Llobregat, coordinated by AMB, will launch the LEZ in the area within the metropolitan area's ring roads on 1 January 2020. This will include a prohibition on the most heavily polluting vehicles making journeys in the area. The launch of the scheme, on the first day of the year, takes place at the same time as the entry into force of the Barcelona climate emergency decree, which also involves the implementation of a wide range of other measures.

These initiatives are included in the proposed ordinance drafted by the municipal council which was presented today by the mayor of Barcelona, Ada Colau, at an event at the Saló de Cròniques, which was also attended by the Catalan Minister for Territory, Damià Calvet; Minister for Health, Alba Vergés; AMB vice-president for Mobility, Transport and Sustainability, Antoni Poveda, and the mayors of Esplugues de Llobregat, Cornellà de Llobregat, L'Hospitalet de Llobregat and Sant Adrià de Besòs, which are the municipalities located either entirely or partially within the LEZ. 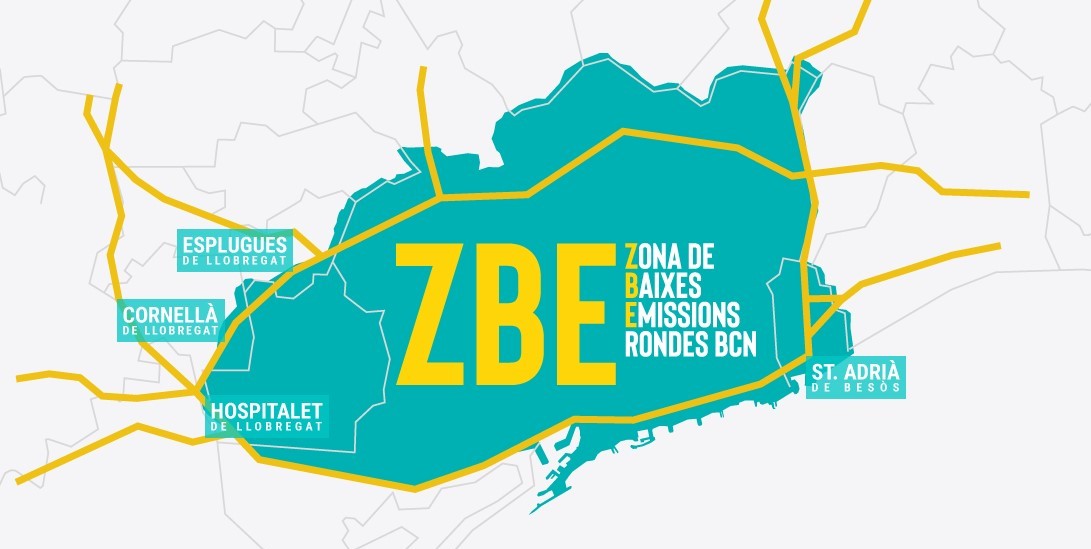 According to the latest air quality assessment report, produced by the Barcelona Public Health Agency, in 2018 the World Health Organization's air pollution reference levels for nitrogen dioxide and suspended particulates were significantly exceeded, and this has occurred repeatedly over the last two decades. The same report states that at least 351 people died in 2018 as a result. Estimates suggest that between 2010 and 2018, 3,749 people died in the city as a result of continuous exposure to pollution levels higher than those recommended by the WHO.

During the presentation, Antoni Poveda recalled that ‘the Barcelona Ring Roads LEZ is a fundamental measure, which will complement the work the AMB has been doing for many years to improve air quality in the metropolis. Among other initiatives, this measure includes the renewal of the public transport fleet with less polluting vehicles, and the metropolitan TGreen card scheme, which has enabled almost 5,000 users to take their private vehicles out of circulation in exchange for three years' free public transport. The flat rate for citizens in the second ring and the Bus exprés and  etrobús lines are other important measures in our fight against air pollution and to improve our citizens' health’.

The high performance metropolitan bus network, which was launched in March 2018, provides more direct and more frequent links between the centre of the metropolis and the main metropolitan corridors. AMB has launched a total of 20 new high-performance lines to date: 11 new AMB Exprés lines and 9 new AMB Metrobús lines. This network has been coordinated with the completion of the New Bus Network in Barcelona, composed by 28 high performance lines in the city and immediate boroughs. 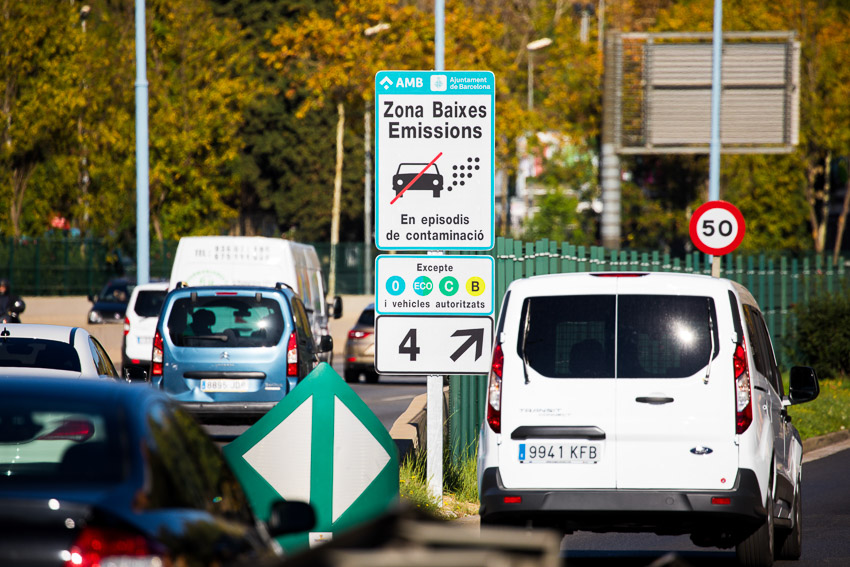 Definition of the Barcelona LEZ

The restriction of the Barcelona Ring Roads LEZ affects around 115,000 vehicles every day. In specific terms, estimates suggest that 85,000 of these 115,000 vehicles are cars, and 30,000
are motorcycles. An estimated daily reduction of 50,000 vehicles is expected.

The ordinance contains a number of exceptions, including vehicles transporting people with reduced mobility and vehicles providing essential services: those used by doctors, funeral homes, civil defence organisations, fire services, the police, etc. Compliance will be enforced by a license plate reading system and a technology platform.

Coordination with other government bodies

Given the cross-boundary nature of atmospheric pollution and the planning that is taking place on various levels, the First Summit for the improvement of air quality in the Barcelona conurbation took place on 6 March 2017. This led to an institutional agreement between the Government of Catalonia, AMB and Barcelona City Council. Its aims include reducing air emissions of pollutants with local effects (primarily NO2 and PM10) by 30% over the next 15 years. This agreement was reaffirmed at the 2nd Summit, on 25 March 2019.

Barcelona City Council has established administrative coordination procedures with the Government of Catalonia and with AMB for joint signing and information measures for the LEZ in the Barcelona ring roads area, and with the municipal councils of L'Hospitalet de Llobregat, Cornellà de Llobregat, Esplugues de Llobregat and Sant Adrià de Besòs, as these municipalities are located entirely or partially within the zone.