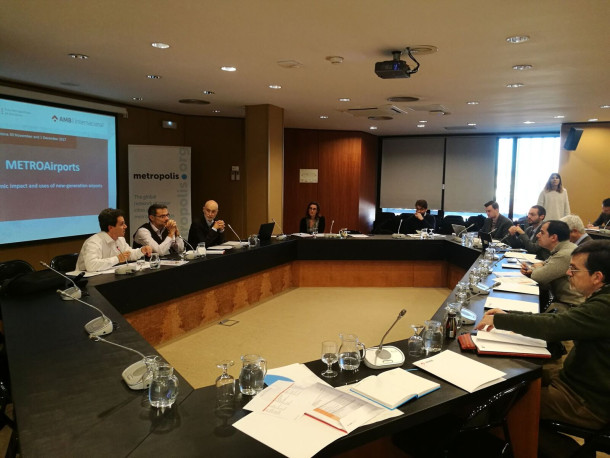 The pilot project " METROAirports: socioeconomic impact and uses of new-generation airports" led by the Metropolitan Area of Barcelona (AMB), with Atlanta, Île-de-France and Santiago de Chile as partners saw its first workshop held in Barcelona at AMB’s offices on November 30th  and December 1st.

The two-day workshop consisted on several working sessions where each partner presented its experience on land planning and socio-economic impact of its airport area. It also included a site visit to the El Prat de Llobregat, the city of AMB where the airport is located.

On November 30th, the session started with an introduction of the Barcelona Metropolitan Area and the origin of the METROAiports project made by Mr Xavi Tiana, Head of International Relations of the AMB. Then, Mr Sergi Alegre; deputy mayor for Mobility, Transport and City Promotion of the city of El Prat de Llobregat and President of the Airport Regions Conference, partner of the project; presented the main outcomes of the Metropolis initiative on Sustainable Airport Areas, the activity which was the precursor of the MetroAirports project.

Later during the day, each partner presented their case on land planning and socio-economic impact of their airport areas. Ignasi Ragàs, expert consultant at IR Economy, Logistics and Territory; Jon Tuley, Senior Principal Planner ; Pablo Fuentes, Regional Director of Planning; and Martin Hervouët, Research Analyst & Project Manager at the Urban Planning Institute of Île-de-France; respectively presented the case of Barcelona, Atlanta, Santiago de Chile airport area and Paris-île-de-France. Then, the partners identified the main common opportunities and challenges of their airport areas, such as accessibility and integration to the transport network, or the presence of low-income communities with social disadvantages.

Participants agreed that the final project report needs to go deeper into some topics addressed by the Sustainable Aiport Areas initiative, namely:

The MetroAirports project will deal with the economic and social aspects (jobs creation, economic activity, mobility, access to housing, security…) between the airport's activity and its impact on the metropolis. Airports are a main node in any metropolis and accessibility has a major significance, as services and activities develop on the landside. This places major importance on urban planning and management of the airport and its interfaces between the terminal and the city.

The next stage is scheduled for the first half of 2018, with a meeting in Atlanta. For more information on the project, please get in touch with Guillaume Berret or Lia Brum from the Metropolis Secretariat General.