Multisectoral partnerships can play an effective role in carrying out projects that revitalize urban space while facilitating citizen participation and economic development in metropolitan areas. This is what shows the project "Outremont and its surroundings", which will redevelop a former marshalling yard in Montreal, and was presented to urban planners from Brussels and Lyon at the end of September.

The City of Montréal and the Université de Montréal (UdM) worked together on this project to improve the quality of life of Montrealers while meeting the city's needs. When completed in 2025, "Outremont and its surroundings" will have redeveloped the former Canadian Pacific Railway yard, transforming a 118-hectare site (38 hectares for the Outremont site and 80 hectares for the surroundings). The objectives of the project were defined as follows:

By the beginning of the project, in 2006, UdM needed to build a new campus (MIL Campus). In the same year UdM acquired the site of the former Outremont marshalling yard in order to establish the campus.

In 2011, the City of Montréal, a partner of the project since its early stages, announced its intention to establish a partnership with the UdM in order to extend the revitalization of the Outremonts area to its surroundings. A planning exercise was conducted on the northern, eastern and southern fringes of the Outremont site. As a result of a participatory approach, this exercise led to the adoption in 2013 of the “Urban, Economic and Social Development Plan (PDUES) for the Marconi-Alexandra, Atlantic, Beaumont and De Castelnau sectors”. This plan identifies the orientations to be followed and the strategies to be implemented so that these areas can benefit from the development of the Outremont site. Located at the junction of four Montréal boroughs, the project promises to be a creative and innovative living environment, both urban and green, where students, researchers, workers, artists and citizens will meet.

Ultimately, "Outremont and its surroundings" will include a university campus and 1,525 housing units (1300 in Outremont and 225 in the surroundings). The 1300 housing units in Outremont will have 15% of social and community housing and 15% of affordable housing. The site will also include shops and office space (potential of 100,000m2), five hectares of new public spaces with a neighborhood park (including sports and recreational facilities), four neighborhood squares, and one large public square. A program to support local initiatives has been implemented to stimulate local entrepreneurs. To ensure the maintenance and intensification of economic activities, the objective of allocating 50% of land use to the "employment" function has been given priority.  In total, $500 million in public investments and $105 million in private investments are planned.

The project places particular emphasis on citizen participation. In addition to the various public consultations during the planning stages, during the construction of the MIL campus, ephemeral projects in partnership with several actors from the city's associative sector are being carried out on the site in order to develop several cultural, social, community and scientific activities.

This project underlines that close collaboration between different sectors can create synergies capable of meeting the various challenges generated by the development of a metropolis. By integrating the development imperatives of the academic sector with the need to revitalize several neighborhoods in a city, the City of Montréal and the UdM have demonstrated that metropolitan governance can be achieved in a transversal manner while integrating citizen participation at the heart of the process. 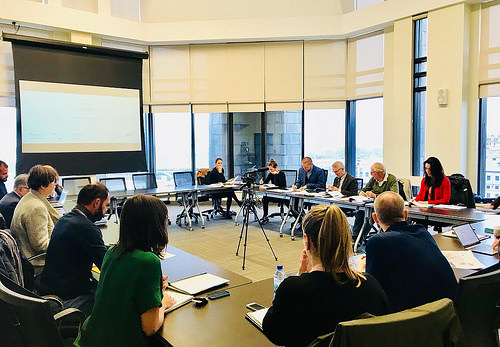 The project "Outremont and its surroundings" was presented at the third workshop of the Metropolis Pilot Project "Innovations in revitalization strategies through urban projects", which took place in Montréal from 24 to 26 September 2018. The previous meetings took place in Brussels and Lyon last June.

The main objective of this pilot project is to exchange experiences on strategies and processes for the revitalization of cities under reconstruction, through concrete examples of major urban projects, through the analysis of five themes: urbanity, urban design, participatory processes, financing and regulation, and governance.

The Brussels-Capital Region, the City of Montréal and the Metropolitan Area of Greater Lyon contribute through university institutes to the scientific support of this exchange program, and to the production of reports and videos. The study will be carried out in collaboration with IAU Île-de-France, the Paris Region Urban and Environmental Agency. The results will be aimed at Metropolis members dealing with comparable issues, and will enable local authorities to find solutions to the problems they encounter in the management of major urban projects.