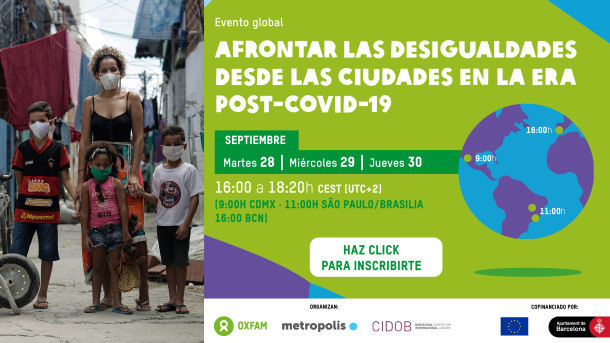 Tackling inequalities from cities in the post Covid-19 era.

Cities and metropolitan areas play a crucial role in the global economy and society. However, within their own territories, we find an unequal distribution of the benefits coming from this role and their intervention in the development and well-being of people.

The processes of urbanization and, in particular, metropolization that are occurring around the world are accelerating processes of inequality, tensions and social gaps that directly or indirectly affect the people who live in these cities. Improving healthcare services, overcoming gender and racial inequalities, or developing new environmentally friendly mobility models are just some of the issues where innovative solutions will have to be provided to transform our cities and metropolitan areas with the aim of improving people's lives.

This is where it becomes important to place the fight against inequalities at the heart of any urban public policy and cooperation model. It is in urban areas where their impact is most felt and where civil society is playing a key role in addressing them.

There is consensus on the need to move towards more equitable societies for their economic, social and political benefits. However, there are still questions about the best ways to understand and address inequalities from a multidimensional and intersectional perspective, and how to translate this into policy action at the urban level. This challenge is even more complex in the post-COVID-19 era because of the increased inequalities that the pandemic has produced.

This high-level global meeting aims to bring together different key actors in the fight against metropolitan inequalities - individuals, expert institutions or think tanks, municipal policy makers, civil society organizations and groups, youth leaders, activists - to reflect on the situation and evolution of urban inequalities in the context of countries in transition, and how to combat them from a multidimensional and intersectional logic, influencing the recovery and reconstruction in the post-COVID-19 world we are heading towards.

This meeting is part of the project "Neighborhoods, unequal views and youth: Positioning multidimensional inequalities in the local political agenda of countries in transition", implemented thanks to an alliance between Oxfam (Brazil, Mexico, Spain), the European Union, the Barcelona City Council, the World Association of the Major Metropolises (Metropolis) and the Barcelona Centre for International Affairs (CIDOB), whose objective is to identify public policies that, from a multidimensional, interdisciplinary and intersectional perspective, reduce inequalities in urban environments.

The project, which is in its final phase of implementation, has systematized and disseminated different methodologies for the measurement and analysis of inequalities in the urban environment; in Mexico it has connected with young people and analyzed their digital behavior in social networks, delving into care as a key to more egalitarian societies; and in Brazil it has supported the political articulation of black women in urban peripheries and has investigated perceptions of different aspects of inequality. At this point, it intends to reflect on what has been achieved, the current and future context of urban inequalities, and the proposals of different actors to address them.

You can register for the event here