In April 2017, in order to actively respond to China’s Belt and Road Initiative and strengthen exchanges and cooperation with countries and regions in the Asia-Pacific region in the field of maritime cooperation, Fuzhou Municipal People’s Government and the Chinese People’s Association for Friendship with Foreign Countries (CPAFFC) set up the 21st-Century Maritime Cooperation Committee within the framework of UCLG ASPAC. Since its establishment, 62 cities and organizations from 27 countries on 5 continents have joined the Committee. In accordance with the Charter of the Committee, its General Assembly shall be convened every three years to discuss the formulation and revisions of the Charter, to review and approve the work reports and plans of the Committee, to set specific themes to discuss in terms of the key policy issues related to maritime cooperation, to take the relevant policy research reports and opinions from the members and to form the policy suggestions to the member cities and local governments. 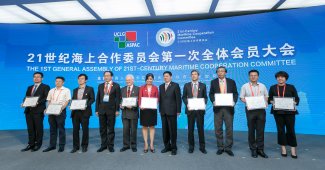