On May 15, local government leaders and networks from around the world will gather in New York for the first session of the Second World Assembly of Local and Regional Governments, convened by the Global Taskforce just before the Habitat III Hearings for Local Authorities on May 16-17.

The Second World Assembly is the mechanism through which the local and regional government constituency will make its official inputs to the New Urban Agenda that will be adopted at the Habitat III Conference in October 2016. The New Urban Agenda will make recommendations to guide urban development policy across the world for the coming decades. 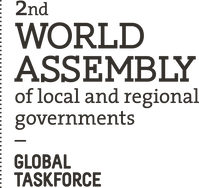 The Second World Assembly builds on the legacy of the First World Assembly of Cities and Local Authorities (WACLA), which was held just before the Habitat II Conference in Istanbul in 1996. More than 500 mayors participated in WACLA. They highlighted the vital role of local government in urban development and called for a permanent structure to coordinate their partnership with the UN, leading to the creation of both UCLG and the UN Advisory Committee on Local Authorities.

The Second World Assembly is a three-part process to be held over the course of 2016. It will consist of two preparatory sessions (one in New York on May 15 and another in Bogota on October 14) and a final gathering in Quito on October 16, held back-to-back with the Habitat III Conference.

The session in New York will allow the World Assembly to prepare for the Local Authority Hearings to be held the following two days.